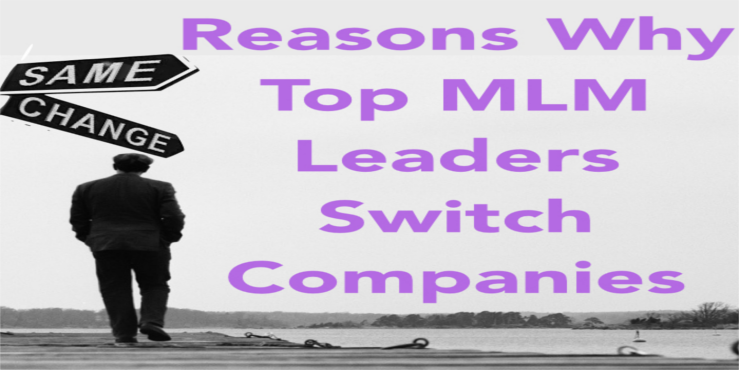 The Pain and Disappointment When MLM Leaders Leave…

I’m going to share with you one of my painful experiences of my MLM career.

I had already been in the business for over 5 years at the time and was earning six figures so I had seen a lot of things happen.

Yet, this stung me and hurt.

Behind every successful person is a mentor and I’ve been fortunate to have 2 very good mentors in my early years of MLM.

One mentor taught me how to do my first meetings and also how to build internationally.

We were super close and we even lived in the same apartment in Kuala Lumpur, Malaysia.

He gave me the opportunity to grow an international business that today expands to over 18 countries.

People called him a “Lifer” in my MLM company; which meant he had been with the company for over 10 years, was super loyal, was widely respected and was one of the top income earners.

He surprised me and broke my heart.

It was one of the most shocking days of my MLM career.

It was the day my mentor left my MLM company to join another company.

My mentor was one of the top 25 income earners in our MLM and supposed to be enjoying the good life already.

I felt shocked and betrayed when I found out.

Wasn’t our company supposed to be the best?

My mentor was enjoying residual income from his MLM business so why start all over again?

Aren’t you supposed to be successful in MLM and just retire?

I started to think negative thoughts.

Maybe my mentor wasn’t as successful financially as everyone made him out to be.

My belief in the MLM profession took a bit hit and doubts started to form.

I had seen and heard many top MLM income earners leave their companies to join new ones but it hurts when it happens directly to you.

This past week one of the top MLM income earners from a well known MLM company left and joined another company.

Many people contacted me and asked me “why?!”

Some were angry but most were just upset and I could tell their belief was shaken.

Here are some lessons that I have learned over my 10 plus years in the network marketing profession that will help you understand why MLM leaders switch companies.

Leaders Leave Their Companies All the Time

If you are in MLM long enough you will understand that this happens all the time.

When you get to the top, leaders get head hunted by other companies and often are offered huge financial incentives to switch over.

I get recruited by other MLM companies all the time and it will happen to you as well in the future.

This happens more frequently in situations where a leader from an established MLM company (been around for at least 10 years) gets recruited by a newer MLM company (less than 3 years.)

When you reach the top, executives from other MLM companies will contact you and offer you rewards to switch over.

Getting a big fat check up front is one of the reasons why a leader may give up his current residual income.

It’s the choice of receiving up front cash versus receiving smaller payouts of residual income spread over time.

One of the leaders who I spoke on the same stage with received a $2 million USD check to give up his current MLM business and to switch over.

So before you bash and say negative things about a MLM leader that just switched companies, ask yourself,

“Could you turn down a $2 million USD check?”

I’m not saying every MLM leader gets offered $2 million to switch but my point is that it’s not an easy decision for many people to turn down huge sums of money.

Here is the major reason why MLM leaders leave.

MLM leaders are successful because they are driven and are always looking for new challenges.

When they reached the top in their MLM company, things get boring after awhile.

They want new goals and starting over at a new company provides that challenge.

They have more money than they could ever use but they consistently take on new challenges to stay motivated.

It’s this drive to never settle and always look for new obstacles to tackle that makes someone successful in the first place.

Some MLM leaders invest in businesses outside MLM while others decide to use their drive to start again in a different MLM company.

Leaders May Have Conflict with the Company Executives

Sometimes leaders have different views from a MLM company’s executives on the direction the company should be going.

They get into conflicts with the executives.

This plays an even bigger role if the MLM company is facing issues with long term stability.

The disagreements dull their excitement and makes the leaders seek new challenges.

Personal Financial Situation of a Leader

You have to understand that being financially successful in MLM is different from being successful with your own personal finances.

We see this all the time in other areas such as entertainment and sports.

Entertainers like MC Hammer or athletes like Mike Tyson are excellent at earning huge income from their careers but they are poor at personal financial decisions and become financially bankrupt in a few short years.

You have NO idea about the personal finance of the leader.

but unfortunately some of them also spend a lot and often spend even MORE than they earn.

So MLM leaders are human and some do get into financial trouble.

When this happens, that immediate cash incentive to switch over gets even more attractive.

They may hear rumors that a particular leader has personal financial issues and then they go recruit them and offer the big cash incentive that will help them out.

There are 2 ways a MLM leader switches over.

Some are able to maintain businesses in 2 separate MLM companies but these are rare.

There maybe bonuses that the Leader has to give up but he still can earn his residual income and receive checks.

In order to keep earning from his current company, there are strict restrictions that the MLM leader has to follow:

2) Leader must not join a MLM company with competing products

This clause alone makes it EXTREMELY HARD for a top MLM Leader to receive income from 2 different MLM companies.

If the leader does 1 social media post about his new company, often that is enough to get him terminated from his old company.

Normally when they join their new company, they will get terminated and stop receiving income from the business they had worked so hard to build.

That is why a Leader assumes tremendous risk when he switches over.

The potential earnings of his new company and his upfront check must be greater than what he is giving up and had worked so hard for.

2) Switch and Bring Everyone Over

The most common ways MLM leaders switchover is they accept the termination from the old MLM company and go all out to promote and build their new business.

They often take all their current leaders and downlines and bring them over to the new company.

Finally never take it out emotionally.

Never get angry or upset at the leader for leaving.

You have no idea of what’s actually going on in the Leader’s life or what’s going on in his business.

Not just in the money he gave up but more importantly, he is risking his reputation.

Focus your energy and time in your business and don’t get distracted by the gossip and chatter.

I’ve seen distributors waste literally days on Facebook defending their company or attacking the Leader or his new company.

That time will be better spent staying focused and doing the 5 Core Daily Production Activities instead.

What You Must Do

Now that you know why top MLM Leaders leave their companies to join new ones, let’s focus on what you must do.

1) Accept it has happened and move on

Don’t waste time debating or talking negative about the leader.

His business is his business and you should spend time focusing on your business.

2) Realize This is YOUR Test of Your Leadership and Commitment

If a top income earner has left your company you must see it as a BIG test of your Leadership and Commitment.

I’ve been in an unfortunate situation where all 3 of my original mentors all quit my company to join others.

The first one to quit was my original sponsor. He quit within my first 2 months of the business.

He tried to recruit me in his company. His opportunity sounded so much better than mine but I remembered my personal promise to myself. I would give myself a good 5 years before I quit.

How strong is YOUR commitment?

This is a test to see if you are TRULY COMMITTED or you just say you are committed when things are easy.

3) Emphasize Your Vision and Belief

If you are a Leader and have an organization already, this is the time you spend more time on sharing your vision in your trainings.

Let your team know that you are confident of your vision and of your belief in the company.

* IMPORTANT – You do NOT need to bring up the leader’s name because you don’t want to be negative and also many of your new distributors won’t even know what happened.

But you do need to be proactive and work on that belief because sooner or later news may spread.

In a worse case scenario, some distributors from the Leader’s new company may use that Leader’s name to recruit your downlines to get them to switch over.

You must be proactive before the situation happens.

This is a major test of your leadership and you must work hard to get people excited about your Vision and their belief in the company.

Accept that MLM leaders switch companies all the time.

For me personally, changing companies is not something I have ever been interested to do.

It’s not my personality.

I’ve always had a motto of “one and done” meaning that I only build a MLM organization once and then I’m done with MLM.

I will go pursue other challenges and start new businesses but never join another MLM business.

I would never switch companies and start over again for 3 reasons.

I had told them the benefits of my company and I have personal relationships at stake. If I switched, I would feel I had lied to them.

3) I would disappoint many distributors
I would not want to do what my mentor had done to me.

My mentor had no bad intentions but when he left, he broke my heart and left me disappointed.

Once you are at the top, the company puts you on a pedestal and many people look up to you. I know that if I personally switch companies, I would let many people down and I could never be happy with myself.

No amount of money could make up the broken hearts and disappointments.

But that’s just my personal opinion.

I totally understand why other MLM leaders do it cause they want new challenges.

I’m similar in many ways except that I choose to pursue challenges in other areas such as coaching and investing.

You must stay focused and don’t get distracted.

Don’t get into the crossfire that hurts everyone.

Use your time wisely and do your 5 Core Daily Production Activities instead.

And most importantly, don’t fall into the temptation of switching because remember the “grass is always greener on other side.”

The MLM Leader became successful because of his skills and who he is and NOT because of the company.

If you are struggling and need to work on your skills, a simple change in scenery won’t help you.

It is who you ARE and your skills that determine your success.

Do you agree or disagree?

Please comment below and let me know your thoughts about this sensitive topic.