Home » Stuck on MLM Recruiting? Read and Implement These 4 Tips on Inviting and Recruiting 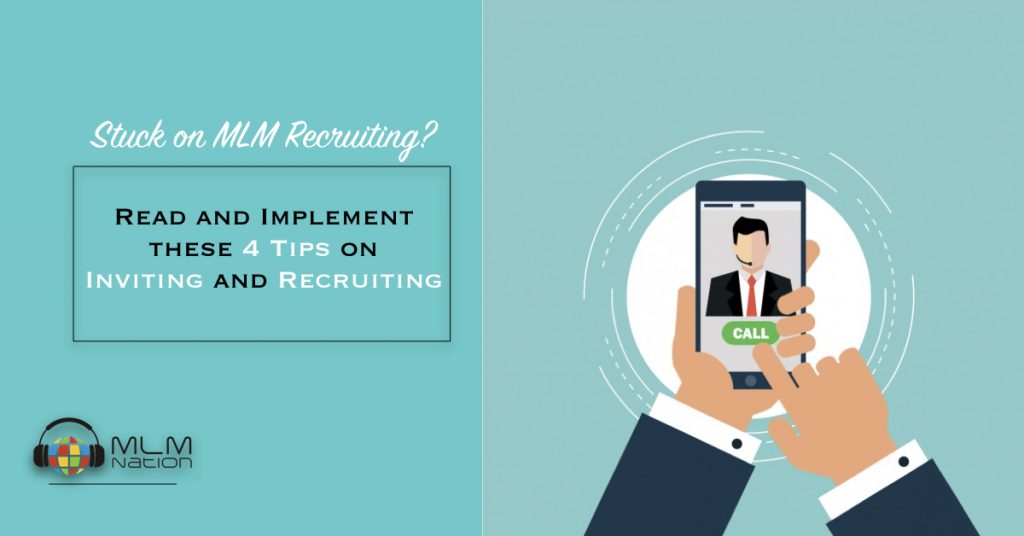 Have you heard some of the myths about recruiting yet?

You know, those myths that say you need to be good in sales…

that you need to know how to present well

that you need to have results to convince people.

Or, that not many people are interested in MLM.

Well, they are just that, myths…

And yet, they continue to circulate and many network marketers still believe them!

Good thing for you, you are reading this now and can start to let go of those false expectations.

Because perhaps you or someone on your team is struggling on recruiting.

Or, maybe you don’t have a big contact list, or maybe you’re a part-timer or a stay at home mom and dad.

You believe in the business, but it’s just not working out for you.

So, take a deep breathe because these next 4 steps will reposition entirely your recruiting approach.

What does “people buy you” exactly mean?

It means that people buy into the energy you have when you approach them!

It’s not about the products or how cool your company is.

Is there confidence and posture in your approach, or are you being desperate and pushy?

There’s an old MLM stereotype that many are familiar with….

You know, the salesy and pushy distributor who is desperately trying to convince you on their product, or to take a look at their business…

That type of energy is like a bug spray.

It repels potential leads, leaders, away!

If you’re not enthusiastic and you’re uncertain in yourself and in what you’re doing, then why would a prospect be interested enough to take a look?

It all comes back to self-belief, and who you are being in that moment.

A tip on Recruiting and Posture
Reject them before they reject you!

Perhaps you’ve had a negative prospect that’s giving you a hard time, or, someone that says they’ll get back to you but never seem to do…

How do you respond to them while keeping your posture and authority?

Simply say to them:

“Obviously this business is not for you but don’t worry about it, I still want to be your friend, I’ll never bring this up, maybe this can work some other time…”

YES you can tell them ‘no’’ before they can tell you ‘no’.


A lot of time we get stuck in a scarcity mindset, meaning that we feel we need to convince that friend, or some prospect…

When in fact we should be in abundance mindset, that they are simply  just another ‘no’ and there’s plenty of others (thousands, millions) out there who this is for.


But also, it’s not being a jerk about it either…

Let them go, that speaks levels in itself.


Have you ever heard of the simple MLM “To Do List”?

Here’s a basic routine you can implement into your schedule:

The key here is to set up a specific time to prospect!

A lot of times we show up when our boss tells us to, right?

Yet… We don’t show up for ourselves.

Make a commitment to show up for yourself.

Be in a hurry and talk less to more people!

The common mistake is getting caught up and talking too much to not enough prospects.


That often happens because we think we have to to present on the spot!

Presenting on the spot makes you a sales person…

If someone does say they are interested, what you can do is simply respond by saying:

“I have a lot of other phone calls coming in…”

“Give me your phone number, and let me know what’s a better time and we can set up a time to talk in a more professional setting”.

That’s the thing, you don’t have to say much!

You don’t have to be the movie, just sell the trailer to the movie.

Remember… A prospect always feels they have to do what you did to them.

How to Invite the 3 Types of Prospects

S prospects:
You approach them by edifying them and inviting them.

An example would be:

“____, I know you are busy so I am going to go right to the point. You are one of the most successful people i know and one of the reasons why you have been successful is because you are always open minded to opportunities.

I look up to you and that’s why I am contacting you.
I am working with a company and that is expanding into the loca area now and we are looking for smart people with good business skills… and I immediately thought about you.

I’m working with this guy called ___ who is in charge of the marketing in this area and he would like to speak to you. Can you take a quick 2 minute phone call?”


Because they’re normally more open minded, and won’t be negative because they won’t burn the relationship.

They also have a lot of referrals.

When approaching the ‘O’ prospects,  approach them by asking for a favor, ask for their advice or opinion.

A lot of this business is about human psychology…

The ‘W’ prospects is someone that looks up to you, you have influence over them.

Here, you want to demand them and give them an order.

An example would be:

“Hey, John, what are you doing tonight?”

Then, you can say to them…

If they ask you what is it, you say,

“It’s something to help you earn an extra two to 500 a month part-time, and won’t interfere with your current job. It would be good for you and you need to learn about it.”

Again, the W stands for people who want to be like you. They look up to you. You have influence over them.

Many network marketers overthink this area and struggle because they think they have to have  a response to every type of objection!

You listen, don’t be defensive!

If someone’s negative on network marketing, don’t fight them, because if you fight them, they’ll be close-minded.

Instead, ask them what happened?

You want to ask, and guide and get them to convince themselves.

Find out what happened.

The WHY question is so powerful here!

Why not instead, ask them why do they see it the way that they do…

Find out from their past previous experience.

You have the ability to show them that this time it is different.


How have you approached recruiting?


Comment below how this was helpful and what you will do next, look forward to hearing from you:)

P.S. If you want to recruit more people or create duplication among your current downline, check out how Purpose Driven Networkers are able to make it happen.