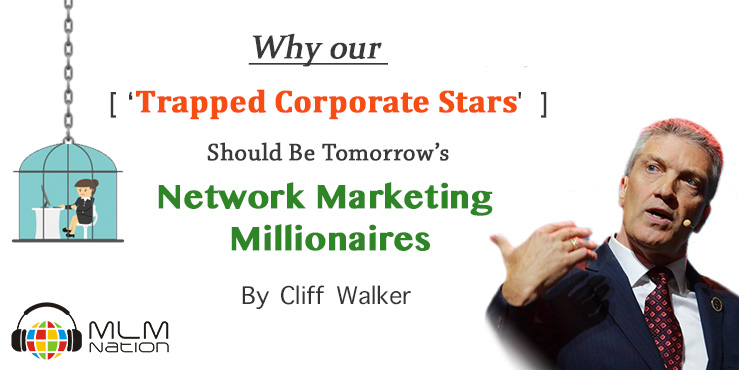 Network marketing continues to suffer a PR backlash. ‘Don’t go there’, say some. ‘Yes, we know all about it, it’s a pyramid scheme,’ say others. Few realise, however, that it’s considered as a serious career path in many in countries from Germany to Japan, where the stigma simply doesn’t exist.

The problem is we’ve attracted the wrong people to network marketing for decades: the desperate, needy, bored and non-committal.

What if tomorrow’s network marketing millionaires were the talented, motivated, entrepreneurial personalities stuck in management or director level jobs?

Here’s how to find out if you’re one of them:

The first thing people do when they don’t understand network marketing is that they write it off as a ‘pyramid scheme’. Ask them what that actually means and few come up with a valid explanation.

The irony though is that a corporate hierarchy is positioned more in the style of a pyramid.

You have the MD at the top who earns the most, the senior director team, then managers and then support staff below them. All earn salaries in a downward spiral. There is no residual income should you stop working for a period of time.

Network marketing on the other hand, is simply and purely a means of distribution.

You’re using your existing and growing network to promote and distribute a company’s products. Network marketing companies spend no money on traditional advertising and distribution, and this is how they’re able to share a greater portion of their sales revenues with their distributors.

There is residual income when you have built a team. Part of the taboo is that people treat network marketing products with skepticism because they don’t have exposure that advertised products do.

However, have you ever bought a product which has been recommended to you? Sure you have!

This is the entire premise of network marketing.

Think of it as ‘direct to consumer’ – a fresh approach in an age of ever-increasing online shopping and a shrinking high street.

2. What about franchising or starting up on your own?

What are the alternative routes to entrepreneurship? Franchising seems like a tried and tested route, but what if you haven’t got between $12,242 USD – $2,448,460 USD cash to start off with to pay the franchise fee?

And would you earn money if you stopped actively selling? And then there’s starting up alone.

You need an idea, business plan, funding, marketing and it’s all in unchartered territory. I completely encourage and applaud those who take the start-up leap of faith, but there’s an important gap that network marketing fills to entrepreneurship.

More than three quarters of people who start a career in network marketing start part time. This gives them the confidence to eventually take the plunge and leave their full time job.

The investment in time need only be spent on improving sales skills and building your network – everything else is taken care of.

The average cost to gain your first set of products starts at anything from $183 to $1,836 on average. Outlay is minimal, as is the risk.

With revenues of nearly $200 billion across the globe the best advice is to start by researching a network marketing company whose products and proposition most appeal to you.

3. The only prerequisite: the right qualities

The first mistake of those entering network marketing is thinking you should start selling to and ‘sponsoring’ friends and family, because they’re easy to talk to.

This is a recipe for disaster.

The only thing you need to look for in others are the right qualities.

Who do you know across your network that’s sales-driven, self-starting, excellent at networking, fearless, tenacious and hard working?

In life, you can request things of people if you have a valid reason for asking. Trying to sell something to the wrong person shows limited consideration for their ‘fit’ to the situation.

That will also leave you with a bad taste in your mouth for network marketing.

Finding someone you know across your network whom you know well, or vaguely, but who has these qualities is a relevant and valid reason to ask them about their career aspirations, and whether they might be interested in forming part of your network, while growing their own.

It’s time we had an honest debate about network marketing. Sometimes the industry lets itself down with badly presented get rich quick-style propositions, but that’s not how it’s meant to be.

For all those unsavoury propositions there is a growing raft of dynamic companies selling high quality products with expanding global networks.

Over the past year, network marketing grew 10 per cent in the UK, though we’re still behind Germany where the market is three times bigger. There, it’s seen as a credible alternative route to entrepreneurship.

Across UK plc we have too many driven, talented, highly motivated individuals stuck in managerial or director jobs that want something more. Their salary potential is limited, office politics will never cease and starting on their own, without the right support, puts a dampener on the dream.

When the CIPD last surveyed 500 entrepreneurs who set up their own businesses, key concerns that were uncovered were the challenging economic climate (65%), working long hours (54%), managing financial issues (52%) and a general lack of funding (52%). Network marketing offers a route to profitable entrepreneurship which bypasses all of these limitations.

We just need to attract the right people and change our perceptions about an industry geared to make millionaires. Having grown 10 per cent in the past year, revenues from network marketing across the UK stand at nearly $3.1 billion USD.

Time to give it another look!

Having risen to the top of four global network marketing companies, and currently on a seven figure income as a result, Cliff Walker is an internationally renowned trainer, speaker and author on all aspects of best practice around network marketing.