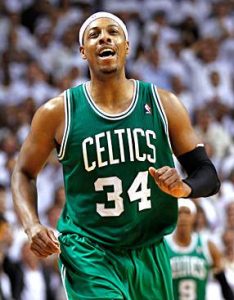 Even though I had worked at the NBA (National Basketball Association) for over 8 years, I hardly watch a game anymore. The interest is not there plus even if I had wanted to, I don’t have TV at home.

But thanks to the internet, I do keep up with the highlights and what’s going on. Last night I smiled as I read and saw the video of how Paul Pierce hit a big 3 pointer in Lebron’ Jame’s face that helped win a BIG NBA Playoffs Game.

Not only am I rooting for Boston but Paul Pierce symbolizes what it takes to be successful in life and in your network marketing business.

Whether you like Paul Pierce or not, you must admire what he has done. After 13 years at the NBA, he is still among the best and most clutch players in the NBA. While most players are retired at the “old age” of 34 years old, Paul is still dominating and beating younger and quicker players.

Paul’s secret is no secret at all. He uses the same formula for success that applies to everything in life; including your MLM business.

Hard work is nonstop commitment to improving yourself everyday.

What I Learned from Paul and how it can help YOU

Back in 2002 – 2003, I got to meet and know Paul Pierce when I used to work with Wang Zhizhi. They were both connected through super NBA agent, Jeff Schwartz at Excel Sports Management.

It is hard for players to get better during a season because during those 6 – 8 months, you are either playing games or devoting practice time to prepare for the games. You hardly have time to work on developing new skills. There is no time for the NBA player’s version of Self Development.

However, the offseason is another story. There are no official practices to attend and no official games to be played. This is when NBA players get to work on new skills.

The Great Ones all make the Commitment to Continued Improvement

Michael Jordan’s commitment to self development transformed him from a skinny athletic player to the BEST basketball player ever.

Jordan’s goal every offseason was to develop a new area of his basketball game every summer. One summer was the 3 pointer. Another summer was his deadly baseline fadeaway jumper. After he got physically beaten up by the Detroit Pistons and lost to them in the Conference Finals in 1988, that summer was spent lifting weights to get bigger and stronger.

In the summer months while some players take it easy to rest, Paul Pierce is working.

After a lunch break and rest, he hits the gym again for a few more hours to work on his skills.

After a break and a nap, he goes back at night to play pickup basketball games against live competition.

His routine was INTENSE!

He goes to bed and then repeats the routine the next day.

Day in… and day out.

Any wonder why he is still dominating and wining basketball games at 34?

How to Get Better

It’s important to note that Paul spends considering amount of time doing the boring work such as drills, strength and conditioning in order to get better.

It is the boring work that makes you better.

The improvement rarely comes when you “have fun” and play against competition. In games, you rarely want to lose and thus you never get outside your comfort zone and try out a new skill because you are afraid to screw up. Skills and improvements are made when you are away from the games and working by yourself.

The same applies to life and in your network marketing business.

What are you doing in your offseason?

Your offseason is the downtime when you not actively “doing” or “engaged” in your mlm business. It is NOT when you are meeting prospects or training your downlines, etc.

Your “offseason” may be when you are commuting to your full time job, or taking time to read a book, etc.

What are you doing to make yourself better everyday?

If you don’t know what to work on, here is a list of 12 books that will help you in your network marketing business.

For a limited time I will be teaching my EXTREME MLM PRODUCTIVITY REGIMEN so that you can achieve success in your business faster. CLICK HERE TO LEARN MORE