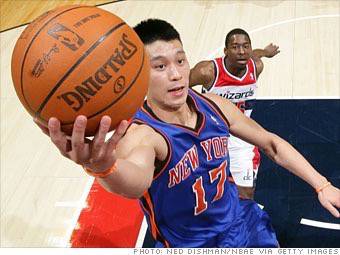 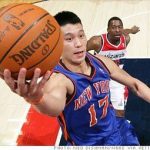 I wanted to go to bed early last night but I was so excited about Jeremy Lin that I could not sleep especially after his 38 point superstar performance against the Lakers on Friday, February 10, 2012.

Everyone in America is talking about Jeremy Lin.  I think he is one of the more amazing success stories in the past 10 years.  If you somehow have missed the story about Jeremy Lin; he is the Harvard graduate that came out of nowhere and is taking the NBA by storm.  He is also the first Chinese American to make it in the NBA… and he is making it BIG!

For my readers out in Asia who don’t have much NBA coverage; this is how crazy and special this story is.  This is the closest analogy that I can think of… Imagine a Malaysian or an Indian kid who wanted to play professional soccer but he gets rejected by all the major soccer academies in Europe… so instead he goes another route and goes to Oxford to study and play soccer.  He plays very well at Oxford but NO professional soccer team is interested in him after he graduates.  He plays well in some exhibitions and then a professional team signs him for a year and then after an unspectacular season, he gets cut.  Then another team picks him up and then he gets cut… And then Manchester United signs him and due to injuries an opportunity to play arises and he dominates.  To cap off an amazing week, he plays against Liverpool in a national televised game in Wembeley Stadium and this no-name kid scores 3 goals against Liverpool!

That is how crazy the Jeremy Lin story has been!

WHAT JEREMY LIN MEANS TO ME

The Jeremy Lin story has so many great angles to it… but for me personally it is especially emotional because he is Asian American.

Jeremy Lin proves to the world that not only can Asians make it to the NBA, that they can be stars at an athletic position.  We have had a few successful Chinese in the NBA such as Wang Zhizhi, Menk Bateer, Yi Jian Lian and of course, Yao Ming… but those guys were all 7 footers and the perception was that unless you are a giant, you have no chance as an Asian to make it to the NBA.

Jeremy Lin breaks all the stereotypes.  He is only 6’3″ and plays the point guard position that most Asians play.  In other words, he is like one of us.  He is just like every Asian.  One of my best friends, Keith told me last night he wishes his father was still alive to see how Jeremy is making all Asians proud.  Jeremy is making us cry, proud and ecstatic… all at the same time.

When Jeremy Lin is playing I feel like I am playing.  I am living vicariously through him.

However, basketball was always an uphill challenge because I grew up around racism and stereotypes.

I grew up in a white neighborhood and because I was Asian American:

– I would always get picked last when people chose teams
– If I was lucky enough to play, no one would pass me the ball
– I’ve been called all types of names from “wonton” to “fried rice” to “ching chang chung”
– I had a hard time playing pickup in the best game in “center court.”  Often, I had to settle to play in the side courts

I had to work so much harder to prove others wrong…

And later on when I would go play against tougher competition in inner city black neighborhoods, the first thing that would happen when I walked into a gym would be stares… people would stare at me and look at me as if I was some alien and I should go home.  Needless to say, no one would wanted me on their team; just because I was Asian.  It was very hard to play in a meaningful game.

I remember when Wang Zhizhi first made it to the NBA in April 2001, I teared up and cried when he came into the game and scored his first point.  I felt that his basket made a statement that I’ve been wanting to tell the entire world that Asians can play basketball too.

With Jeremy Lin, he takes it to another level.  Jeremy is not a giant and he was not highly recruited but he is still able to make it and make it BIG!

Jeremy Lin is our hero and our Jackie Robinson.

WHAT WE CAN LEARN FROM JEREMY LIN

4 Lessons We Can Learn from Jeremy Lin

1) Don’t Let Others Choose Your Life
I grew up with the typical Asian stereotype that Asians should be either doctors, lawyers or engineers.  I admire Jeremy for choosing to pursue what he wanted instead of living the life that others think you should live.

2) Never Give Up On Your Dream
Jeremy Lin’s dream school was to play basketball at Stanford… when Stanford rejected him, he could have easily settled and given up on his dream.  Instead he chose the most unlikeliest places to pursue his dream and attended Harvard.  When no NBA team drafted him after graduation, Jeremy kept working hard to pursue his goal of making it to the NBA.

3) Always Be Ready
Jeremy was “lucky” and got his big break to play when some of his teammates were injured.  Luck is when “hard work meets opportunity.”  You always have to be ready cause you never know when your break will come.  Always be ready means even when there is no opportunity visible, you are constantly practicing and working on your skills.  Whether it is working on your sales skills, networking skills or basketball skills, you always have to be ready!

4) Speaking Up for What You Believe in
Jeremy Lin is Christian and speaks openly about his faith.  We can all learn and speak up for what we believe in!

JEREMY LIN IS A HERO

The ironic thing is as recent as 2 weeks ago, I had been thinking about Jeremy Lin and had asked my mom (who lives in NYC) how he was doing.  My mom said that it had been a tough NBA journey for him so far since he had been cut from 2 NBA teams in 2 weeks… But to me he was still a hero just because he was an Asian American that simply made the NBA… I  was even looking to buy his Golden State Warriors jersey from last season.  Alas, because he was a no-name player, nothing was available…. but I’m sure getting a jersey is no problem now and his jersey will be one of the top sellers this year!

Regardless of what Jeremy Lin is going to do next, he is a success already and someone we can all learn from.  He is someone that I will proudly tell my son Ethan about when he grows up.

Jeremy Lin makes me proud of my heritage and is a hero.  Not only has the path to playing basketball has just become easier for everyone, but we can all pursue our dreams more confidently.