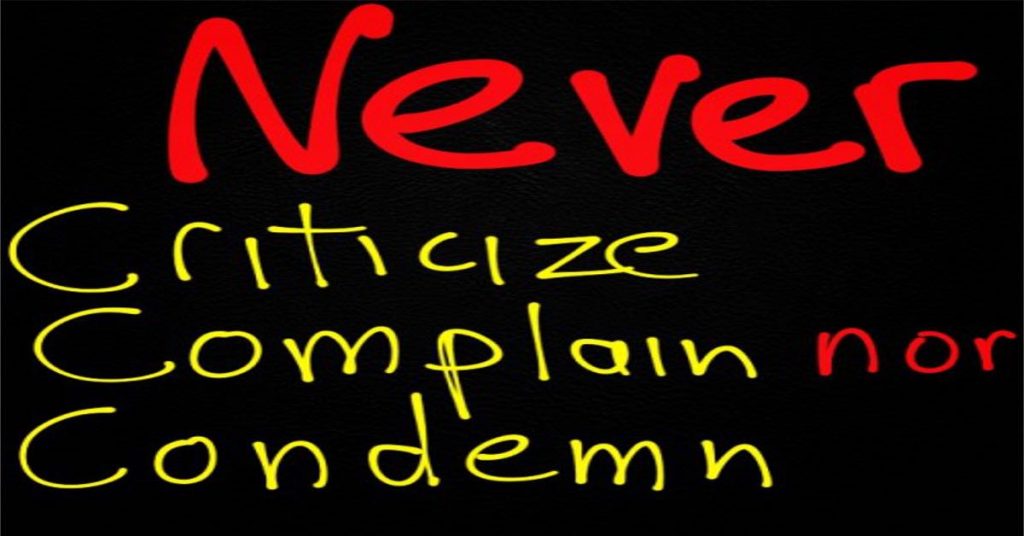 I used to be this type of scary person.

I wasn’t even aware of the damage I was doing to others, and how badly I was harming myself.

No wonder I repelled successful people from my life.

No one respected me because of this one thing I did.

The only thing that you could say about me was that I was unconsciously incompetent.

That’s how clueless I was.

Fortunately, in my entrepreneurial and MLM journey, I discovered this fatal flaw in my character before it ruined my business.

I realized that, throughout most of my adult life, I was making the cardinal sin of always finding bad things say about others.

In other words, I would always find something negative to say, or be critical of a person, and then talk behind that person’s back.

I would have failed my People Filter test because I always had something negative to say about everyone.

I didn’t have bad intentions, but something negative always came out in my conversations.

I don’t know why I did it. Maybe I did it so that, subconsciously, it would make me feel better about my own shortcomings. Sometimes I think I didn’t know what else to say, and I would just enjoy passing gossip and stirring up controversy.

Do you know someone like that? Someone who always talks badly about others? They focus on the negative topics.

One of the best things that MLM did for me was make me aware of my own shortcomings.

As I grew my business and started to study Leadership and how to lead a growing organization, I learned that successful leaders never speak negatively about anyone.

I still remember where I was when I first heard this CD on MLM Leadership. I was pulling into my garage in my apartment on Bundy Street in Los Angeles, and I heard the speaker emphasize the importance of edifying and living your life according to this rule:

Never criticize, complain, or condemn anyone. If you don’t have anything positive to say, then don’t say anything.

At first it was difficult for me, and I had to work hard to stop myself from talking badly about others. However, as I changed my habit, I noticed that I became a person with whom people wanted to be associated.

My relationships with others improved, and my leadership and ability to influence others increased.

No One Is Perfect

One of the reasons why the habit of speaking badly about others is so dangerous is because it blinds you to the positive traits of a person.

We are all human, and no human is perfect. We all have our bad parts, but most of us have some good in us, too.

Why focus on the bad when it’s a given that we all have faults?!

Our faults don’t make us unique, but our strengths do!

Why not focus on the positive things instead?

Let me ask you this.

Think about the last time you focused on the negative things about someone or started a fight. Did ANYTHING good come out of that?!

Regardless of whether you were right or wrong, was the amount of energy spent fighting that battle worth it?

Did it make you happier and if it did, at what cost?! It’s simply not worth it.

Talking badly about people automatically makes you focus on the negative. It blinds you to solutions that can make the situation better.

One Day It’s Her, the Next Day It’s You

Nowadays, I have an internal radar that goes off and warns me.

If someone talks badly about someone, my alarm bells automatically start ringing. They warn me to stay away from that person.

Three Reasons to Avoid People Who Talk Badly about Others.

1) That person focuses on the negative and has automatically failed my People Filter.

When someone focuses on the negative, they bring everyone down.

They can never lift anyone up or find the answers to problems.

It’s simply NOT motivating. Instead, it’s rather depressing and annoying.

In other words, they add NO value to my life, and instead, they will suck up my energy.

If they don’t go away, I will walk away.

2) It’s too Easy to Get Sucked In
I know myself. I realize I’m not perfect.

Once someone says something bad, I know it’s too tempting to join the conversation and add to the gossip.

The next thing I know, I’ll be speaking badly about someone, too.

By the way, have you ever realized that almost every time you say something bad about someone, somehow that person always hears about it. Your words come back to haunt you.

What comes around goes around, and I don’t need these people to sidetrack me.

3) Today that person may be verbally trashing someone else, but who will he or she trash tomorrow?

I’ve learned over the years that “How you do something is how you do everything.”

If someone talks badly about another person today, tomorrow he or she may be criticizing me behind my back.

People ask me for leadership tips all the time, and I would say the tip below is a fundamental rule. You can apply this rule whether you are leading your family, MLM organization, or just dealing with what comes up in your daily life:

Never criticize, complain, or condemn anyone. If you don’t have anything positive to say, then don’t say anything.

Not saying anything may be the toughest part because sometimes we feel that we must comment on everything.

However, Leadership is learning when and when NOT to open your mouth.

If you don’t have anything good to say, just shut up and don’t say anything!

NEVER, NEVER ever say anything bad about anyone.