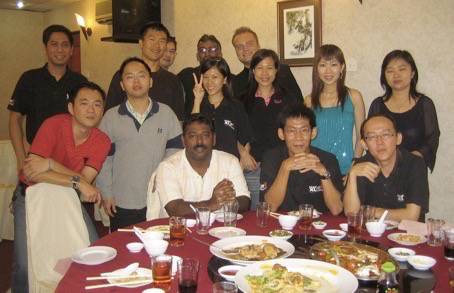 Time flies so fast. I’ve been in Asia for over 3 weeks already and finally going home. During this trip I went to so many cities… from Kuala Lumpur to Penang to Manila to Kuala Lumpur to Kuching to Kuala Lumpur and then back to Manila. It’s been a great experience. I am on a super long journey back home. For some reason, in order for me to get back to Los Angeles from Manila, I had to go from Philippines to Singapore to Malaysia to Hong Kong and then finally to Los Angeles. That is 5 countries in a 36 hour commute!

It was great to go back to Malaysia again. I went back with Scott McGee and it was cool to see him learn new cultures and meet new friends. It was his first time out of the country! Most of his friends back in Houston are stuck in school or can’t get jobs because of the USA economy while thanks to USANA, Scott is having a blast traveling to Malaysia, Philippines and Singapore.

After arriving to Kuala Lumpur and settling in, we went to the city and state of Penang to visit some friends and do a training seminar. It was great to see my friends again.

One of the highlights there was seeing Ian Lim again. Ian Lim was the smartest 8 year old except that he is no longer 8! He is 10 now! So he is now the smartest 10 year old kid! I took one afternoon to go to his grandparent’s house to hang out with Ian. I got Ian the “Cashflow 101 for Kids” board game by Rich Dad Poor Dad. I thought it would take him a few trys to learn the game but he picked it up on the first time we played! It’s amazing. Ian knows about passive income, liabilities (such as credit card, unplanned spending) and to balance a expenses/income sheet! What really surprised me was how good Ian’s math was. In the game, if his income was $1300 and his expenses was $650 (and thus net income was $650), Ian would know automatically to take only $650 from the bank on each turn. Most kids would have to take the $1300 first… and then give back $650. As the figures got more complicated, Ian could still calculate his net on each turn. That was very impressive. I know most 10 year old kids couldn’t do that and some may even need a calculator! I know for sure that when I was 10, I didn’t know what income, passive income and expenses were!!!

I also got to play some hoops with Ian. It was my first time playing in a long time but it was still fun. The competition in Malaysia isn’t very good but it was fun to play with Ian. Ian is in much better shape than before and lost weight due to eating better and more exercise. I am proud of him. We just played pickup with other kids for like 2 hours. It was very fun. Hoops is still my #1 passion. Ian is such a great kid. I wish he could come and spend some time with me in Los Angeles. Perhaps in another few years where he is old enough to travel alone, he can fly out. 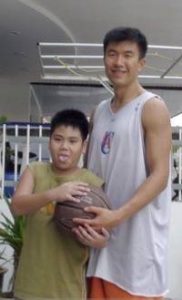 In Penang, we also went karaoke with our team. I’m starting to like karaoke better now. It was Scott’s first time and he had a good time. Karaoke in Asia is so different from karaoke in USA. You rent these private rooms and you have a nice buffet and drinks and you can sing all night. I think I know the secret to karaoke… even if you suck (like me) you just practice and sing the same old songs all the time and eventually you get pretty good. I think that is what I’m going to do next time… HaHa. … speaking of good, Connie Mooi is really good… You can always sing a duet with her… and then on the second night on our team dinner, we had the former Penang State Karaoke Champ come by. Once he came, he put everyone else to shame and I was like, “ok… no more singing for me for the rest of the night… I’ll just sit back down and eat my dinner and be entertained for the rest of the night!”

After Penang we went back to Kuala Lumpur for a pitstop and then went to the Philippines for the first time in my life. I couldn’t believe that I was actually going there. We stayed in Makati in Legaspi Village. It was very nice there especially where Greenbelt was. That was a super nice mall and with great restaurants. What amazed me about the Philippines was how many malls there are! It seems like everywhere you go, there is a shopping mall! In terms of the people there, Filipinos are super friendly and it was really easy for me to relate to everyone since they are Americanized. I can talk forever to Filipinos about the NBA and basketball… They are crazy for hoops there. I also noticed that Filipinos are really hungry for a good business opportunity. Because of the terrible economic conditions there, small home based businesses like USANA is very attractive. Most people make only like $250 USD a month there and it is easier for people to make $250 a month in USANA than at a job (plus no boss and no set hours!). It was very interesting to see how the situation was so different from the USA and how the Filipino mindset was different. They work so much harder and would work and network up to the wee hours in the morning! I even had a meeting at 120 am to 230am one time. How many Americans would go out of the house for a business meeting at 140am?!!!

After Philippines, we went back to Kuala Lumpur for another pit stop before going to Kuching which is a small city (600,000 population) in eastern Malaysia. I was getting a little tired of the traveling and initially wasn’t that excited to go (due to fatigue) but I was so happy I went because we had the greatest time there! We went there to visit my leaders there, Vun and Teresa. They took us around. We went to the Sarawak Cultural Village and also had tons of great food.

One of my top 10 favorite foods now is this wild vegetable that is only available in the eastern Malaysia. It is called Midin and it is awesome! I love the texture and how it is crunchy. You can prepare it in any way and it tastes good. My personal favorite is sautéed with garlic. I wish they had this vegetable in the USA. If they had this in America, I’m sure more Americans would eat their veggies! Both Scott, John Goerlitz and I all devoured this vegetable like there was no tomorrow.

Another great thing was that I ate tons of fruits and had amazing seafood while I was out there. The seafood was really fresh and was awesome.

Asides from having fun and eating great, we also had 2 great days of training seminars. There are really good people out in Kuching and I really want to do my best to help them grow and be successful. I believe in the next 6 months, you will see really exciting things going on. One thing for sure, I’ll definitely be going back there again!

Here’s a funny photo from Kuching. John Goerlitz is carting away Scott McGee in the “Drunk Chair.” They have this chair in Kuching where if you are too drunk to stand up, they just put you in this chair and cart you away!

To wrap up my Asia trip, I went back to Manila for a short 36 hour trip. There are exciting things going on there and I had to go set up a condo for our Team XLR8 headquarters. Scott will also move and live there for 2 years. It will be exciting and good times!

Until next time, God Bless!