This past week has been great.

One of my best friends, John Goerlitz got married and I also got to spend quality time catching up with some great friends who flew into Los Angeles for the wedding.

On top of all that, I also got one of the best compliments that one can receive from 2 different people on 2 different occasions.

Another Trip to the Happiest Place on Earth!

First fun thing we did was another trip back to Disneyland!

My friend Ruth and her husband Clark was in town and she had never been to Disneyland before so it was another excuse for me to take Ethan and see Mickey again.

Ruth is a super dear friend.

She is a huge dog lover and I still remember all the advice she gave me on how to raise Obi properly when Obi was just a puppy a few years back.

Every time we visited NYC and go to Ruth’s house, Obi would take all the toys out of the chest and play with them.

We have an unlimited annual pass so I usually take Ethan there at least once a month. Even though we go on the same rides, I always enjoy going there since Disneyland is so nice and

when you get inside it’s like you are in a different world.

Seems like everyone just becomes friendlier and nicer once they enter “the happiest place on earth.” If only we could always be that friendly to each other.

Ruth has a magical touch and was awesome with Ethan. Ethan loved her.

Ethan loved being with Ruth and that made Disneyland even more fun for me because… for the first time… I got to go on the rides that I wanted to go to!

While Ethan napped, Ruth’s husband and I hit 4 rides in less than 75 minutes.

That’s the best part when you go on a weekday and everyone else is working! Normally, the waiting line for those 4 popular lines could be 30 – 60 minutes each. 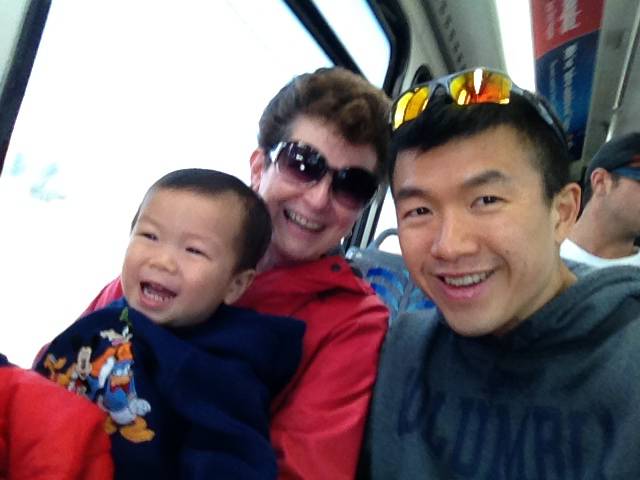 Ethan also got to see and take pictures with Mickey on 2 different locations this time.

We were all happy campers!

Catching Up with a Younger “Brother”

One of my close family friends and also businses partners, Randy Ng was also in town. 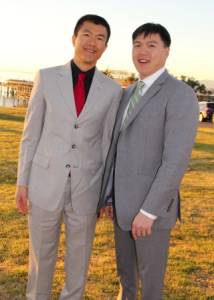 It was my first time meeting his fiancee, Bonnie and we spent quality time catching up and hanging out.

I’ve always considered Randy as a “younger brother” and we have had great times together when I used to go to Malaysia frequently.

Whether it was in Kuala Lumpur, Penang, Kuching, etc Randy was always with me as we traveled across different parts of Malaysia and did business meetings.

The highlight of the whole week was my friend John Goerlitz’s wedding.

John is one of my close friends and was one of my groomsmen at my wedding and it was nice to see him finally get married.

He was the last man standing among my close friends.

I’m friends with both him and his wife Kim and it was nice to see them finally tie the knot.

How I Met John

John is not just one of my close friends but he is also one of my top leaders in my network marketing business. He is a Ruby Director, a 6 figure income earner and also won Growth #10 award.(Ranked #10 as fastest growing distributor out of over 120,000 distributors)

Thinking about how John and I met is an interesting story.

It’s another one of the 6 Degrees of Separation and to make a long story short, John and I used to work at the NBA (National Basketball Assocation) and we were just acquaitances.

Then one day… on my department’s surprise going away party for me, John randomly showed up on that Thursday night.

A few hours and a few drinks later, while everyone else went home to get ready for work the next day, it was only John and I partying across different parts of Manhattan.

I’m leaving out a lot of details since I can write a book about that night but in a nutshell, that is how our friendship was born.

Later on, we became even closer friends as John and I became business partners in my network marketing business.

At the time, John decided he needed his change his career and financial situation and realized network marketing was his best and lowest risk option.

When John started, he was FAR from being an instant success but after consistent effort and learning, John started to see success after 6 months.

We used to talk at least an hour a day and that is how John learned the communication and prospecting skills that I now teach in the S.O.W. SPONSORING SYSTEM.

It was during these informal training sessions that our friendship was built and grew.

One of the misconceptions about the network marketing industry is that you lose all your friends but if you know how to Communicate and Followup Properly, you actually gain friends and not lose friends.

It’s just a matter of being trained properly and know how not to be pushy and salesy.

Getting the Best Compliment Twice! 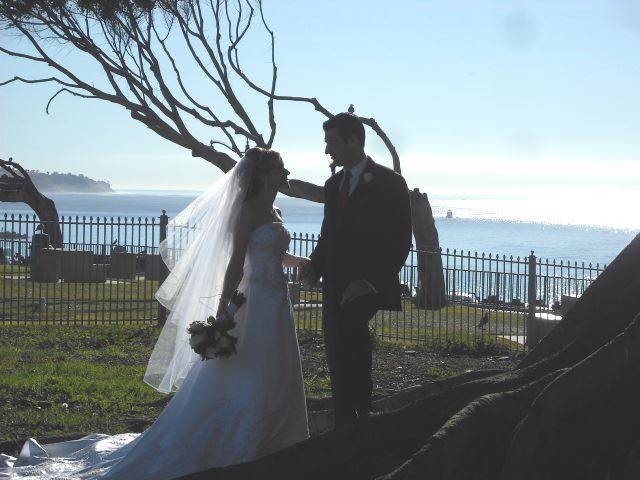 The ceremony happended right before sunset and it was a huge party afterwards.

It was a ton of fun!

While we were just hanging out and having a good time, I randomly received the SAME COMPLIMENT from 2 different close friends of John at 2 different times. Once was in the bathroom and another was at the bar.

Both friends thanked me for “changing John”

When they said that to me, it was kind of weird to receive such a serious compliment when everyone was partying and taking advantage of the open bar.

But later on it sinked in and it was a good feeling.

They thanked me because over the years John had transformed from a crazy party animal (I can’t share his stories in this blog) to a successful entrepreneur who runs a six figure income network marketing home business.

It was nice to hear that I had a positive impact on someone’s life but I can’t take full credit.

I Only Provided the Spark, John Did the Rest

John gets the credit for his success.

I only gave John the opportunity and coaching…

I just started the spark…

The real credit goes to John because he was the one that took action and did something.

Many people all want to be successful but they are not willing to pay the price and stick to a proven consistent routine.

I remember way back in the early years of our mentoring and friendship that John told me one day that he realized he had to make sacrifices and pay the price. He could no longer party every night and limited his partying to just 1 or 2 nights a week.

Instead of hanging out, partying or watching TV every night after work, John would commit 2 – 3 hours every night working his network marketing business. He would follow the 5-5-3 Prospecting Routine day in and day out.

Instead of listening to music on his iPod, he would listen to self development and improve his communication skills.

And 3 years later, he was able to quit his full time job and work for himself and go full time in network marketing.

John’s success happened cause he realized he had to change and give things up.

I still remember John telling me one day that he had to make sacrifices and pay a price. If not now, he would have to pay the price sooner or later and he’d much rather pay the price now (give up the partying and hanging out and working his home business every night) instead of paying the price and not having money nor time with his family later on.

That was the big “aha moment.”

Everyone wants to be succesful, but how many will pay the price that John did?

Most people want to be successful but fail to realize that you have to CHANGE and give things up in order to get what we want.

The good news is that you can get back what you give up later on but you must be willing to pay the short term price for long term gain.

What Do You Want to Accomplish in Your Life.

What about your goals for this current year?

Are you on-track or off-track to achieve your New Year’s resolutions?

If you are off-track or worse, you gave up on them already, it’s probably because you have NOT changed enough and NOT willing to do what it takes.

Success is not easy.

There is no BS about it.

But it’s all worth it. Just ask John.

Go take inventory today of what you have done so far this year and ask yourself are you really paying the price for the success you want?!

P.S. P.S. In the last 10 years, I have read almost every book and listened to every audio on network marketing and then took what worked and did not work and created THE S.O.W. SPONSORING SYSTEM.

If you want a short cut to your success in network marketing and learn a simple and duplicatable approach to sponsoring, go check out THE S.O.W. SPONSORING SYSTEM. It is proven to work and is backed by 4 Different Money Back Guarantees.

For Distributors Who Don’t Have Sales Experience

so that you can Sponsor MORE distributors regardless of whether you are good in sales or know how to present.

This 20 DVD/CD Training is divided into 7 Components

COMPONENT 1: The Attitude and Daily Routine of Top Sponsors 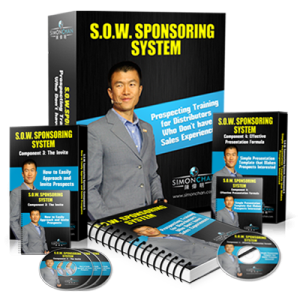 COMPONENT 3: How to Easily Approach and Invite Prospects

COMPONENT 4: Learn how NOT to Bore Your Prospects

COMPONENT 5: How to Overcome Over 50 Types of Objections

COMPONENT 6: How to Maximize Your Business Through Followups

COMPONENT 7: Closing and Getting Your Prospects to Join You

Click Here to Learn More about this Comprehensive Training course