Home » How To Get Your Downlines to Attend Celebrations and Conventions 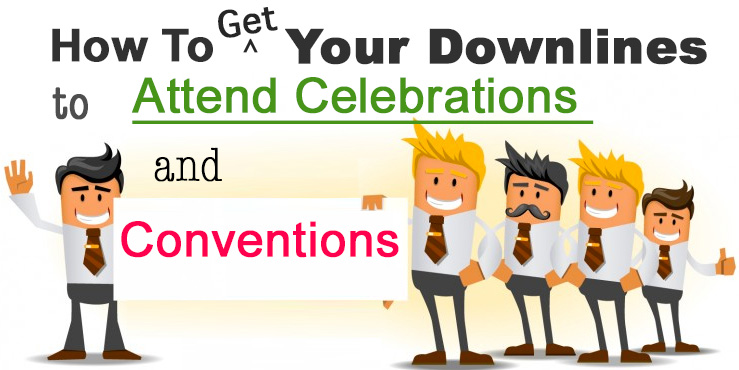 Before we go into this important lesson, here are some additional trainings on how to maximize your time spent on training events and especially your company’s annual Convention.

How to Prepare, Promote and Get Ready for Convention
Why You Must Attend Your Company’s Convention
How to Get Downlines to Attend Convention and Other Training Events
How to Get Prepare and Maximize Your Time at Convention

Leadership is about serving others and getting your team to do things that will benefit THEM.

And sometimes it is getting them to do things that they would not normally do nor want to do.

As you grow your mind and develop as a leader, you will find the gap grows between what you think is obvious and should be done… and what your downlines think they should do.

Getting Downlines to Attend Major Events

And one example is regarding attending Celebrations and Conventions.

As a leader, you already know how important it is to go to Major Events like Celebrations and Conventions.

But most new assoicates unfortunately may not think so.

Looking back to my first year in network marketing, I was simliar to most new distributors. At the time, I thought events were not important. I believed success was 100% beause of your skills and thought they were just rah rah motivational fluff and an expense that I could avoid.

How wrong I was!

And how grateful I was to my uplines that got me to attend my first Celebration.

So you have to sell the importance of attending Celebrations and Conventions to your downlines.

You Must Go or You are Out!

I would not be where I am today if I had never attended these events. Going there is CRITICAL to your downlines’s success.

When I fully realized how valuable events was, I created a policy that has worked well and saved me considerably amounts of time.

If you are in my downline and don’t go to Convention, you are immediately OUT and I will never work 1 on 1 with you again.

Why I am so harsh?

Cause I have never met someone that has been successful (earns over $1,000 USD a week) that has never been to Convention.

So basically if you don’t go, you will never be successful.

And if you will never be successful, you are wasting your time and most importantly MY TIME.

So I’d rather save the frustrations and you might as well quit right then.

There is no point in going further.

That is how important going to Celebrations and Conventions are.

Having that strict policy helped me grow faster in network markeitng.

2) It helped me save time and frustration by filtering out the distributors that were going to fail and not worth my time. And that time saved allowed me to focus on developing future leaders and also more prospecting. (remember everything has a time cost)

So that policy was a win win for everyone.

3 Examples of How Celebrations and Conventions Have Helped Me

My first Celeration CHANGED my mindset about the entire MLM industry.

It had such a big impact that I immediately went from Director to Silver Director the DAYS AFTER the Celebration.

The BIG mindset shift came when I found out a Silver Director who had already earned a million USD in a previous industry and was “retired” decided to go out and do network marketing!

Before that, I thought MLM was only for people who were middle class and struggling.

But once I personally met a upper class person chose network marketing because of the potential for residual income, my beliefs in the entire industry SKYROCKETED!

I carried that Belief and Passion into my prospecting and I became more confident than ever. Because people always BUY YOU when you prospect, that STRONGER BELIEF and CONFIDENCE allowed me to sign up tons of people within days of the event.

That is how the Celebration helped me go from Director to Silver Director in a few days.

Before my first Interational Convention, I never had the CLEAR vision to grow an international network marketing business.

I had wanted to go global but that was just an empty wish because deep down I was not sure how to do it nor was it really possible.

But after I went to my first Convention and saw all the people from Mexico and Asia, I was inspired.

And that ONE SINGLE INSPIRATION is sometimes worth the price of the ticket, lodging and airfare.

For me, that Inspiration created a vision and made me go out and build a global network marketing business with over 55,000 distirbutors in over 15 countries.

Back in 2007, my wife and I were at a post Convention event at the Hard Rock Cafe in Salt Lake City, Utah. (USA)

It was a casual networking event with buffet and drinks and towards the latter part of the night, my wife met a Silver Director from Canada that shared with her one little secret.

By the way often the real hidden gems that your downlines will learn at events are not at the training itself but often at the post event networking functions such as impromptu dinners and drinks, etc.

At the time my wife (who is only very very very very part time in our MLM business) didn’t really know the impact of what she learned. It wasn’t until she told me and I put 1 and 1 together that I realized what a golden nugget we had uncovered!

That lone secret created at least an extra $70,000 USD in my network marketing business in 2008.

So what was that “little secret?”

It’s actually too secret and I can’t share it in public. But join my waiting list for my Mastermind Coaching Groups and if you get accepted, ask me and I will tell you.

So those are 3 ways that Celebrations and Conventions have helped me.

Go share these stories to your downline and help lead them to make the decisoin to attend events.

My last advice is to always always PROMOTE the events ahead of time.

Don’t wait to the last minute to promote because things always come up for downlines.

Also, the more your downlines hear it from you, the more they get the message. Remember we forget easily so we need repeated listening to the same message!

I know for a fact that the reason I decided to go to my first Celebration was because my uplines had talked about it for months… they promoted it like crazy and it got me curious and that’s why I went.

And thank goodness I went!

So be the Leader that serves your people and do what is best for them.

Get them to the next Celebration and Convention and as you help them, you will see your business grow.

If you have any success stories from attending Celebrations and Conventions, please comment below!